EU although dad was only journalist at messina 1955 and tried to live up to jean monet's peaceful solution, norman macrae's attempts to celebrate uniting peoples worldwide were often rebuffed by europeans- exception romano prodi- italian translator of economist entrepreneurial revolution 1976; another possible exception mary robinson who joined an er brainstorming round europe

US_ASIA our Diaspora Scot attempts to unite two thirds of humans who are asian with west stared well in 1962 with jfk kennedy's endorsement of consider japan and asia rising;

worldwide digital/real- humanisin ai: we updtate our 1984 book 2025report counting down sustianability 2025 and need to transform education here; dad was one of last journalists to meet von neumann whose biography he completed in 1992; having leaked likely consequences of 100 times more technology through the economist ahead of each decade in quarters 3, 4 of 20th c

-we wish all continuing duke of edinburgh award youth apprenticeships well with today being when Edinburgh would have been 100 -and while i prize the tie he gave me like no other physical gift- personally the greatest knowledge gifts i ever received came from sir fazle abed -whose knowhow gifts do you value most chris.macrae@yahoo.co.uk

Posted by chris macrae at 8:21 PM No comments:

did humanity ever have it as good as jfkennedy

depending how you tell history- world wars which dominated the first half of 20th century had their root cause in not sharing equally the benefits of machine age started up out of glasgow 1760 by james watt and adam smith; instead colonisers, slave traders, slayers of native people globally monooplised both the energy and communications power of machines until mainly 7 white empires and one asian one (japan) had mapped out world trade and powervtheir way with a few small nations also advanced but tryng to stay neutral 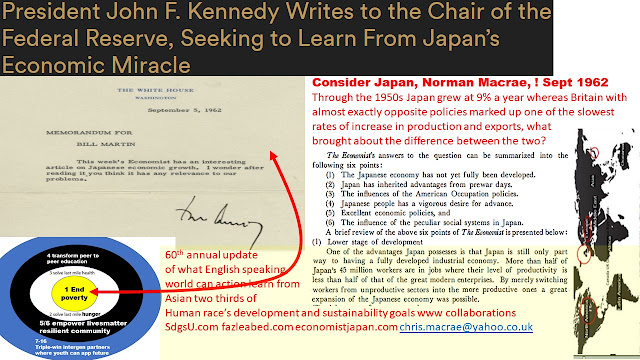 Posted by chris macrae at 9:37 AM No comments:

we first met bbc's paul rose at london's royal geo society where prince charles was prize giving at www.ashden.org - we accompanied rose to muhammad yunus 69th birthday party bangladesh june 2009 and around 2010 we caught up with him for this new york coffee- he explained a lot including how empire's education so nearly blocked his life's purpose-- we hope to sip some more coffee glasgow cop26 nov 2021 chris.macrae@yahoo.co.uk

Posted by chris macrae at 4:31 AM No comments:

young society prize winners - from space to every community on earth?

one of the ideas that blows my mind is that ts less than 13 years that peoples could connect from everywhere rounf google maps- we can all see the world the way ron does should we choose so to do- it seems to me natuure is borderless and serves how species locally- can we the peoples vote for public servants who care about diversity as much as she does- if you think not- why not? wjats made our media so anti-social even as it laims the opposie? my life since 1976 as a statistiian has researched the world's largest brands - and sad to say many more spread hatred or mental inscurity than love one another

so much to learn from youth; on one occasion astro ron garan turned up as fellow judge

Posted by chris macrae at 4:37 AM No comments:

We have also established the council of luninaries in dec 2020

The luminaries  come from their leading roles in different disciplines of education - they have been sharing great insights and engaged in intellectual debates of the most pressing issues in education We aim to recognise the most innovative research and practices in education; we encourage education leaders from around the world to collaborate more closely when it come to innovation – focusing on creating sustainable social value and transforming experience for future generations; successful innovations in education are those that are scalable and have the power to deliver system change In the past year I have seen many education innovate solutions sparked by the challenging circumstances of the pandemic – we must take the lesson, learn from the last year and shape what education will look like in the future- the world is changing very quickly – the pandemic has surfaced great challenges whether for developed or developing countries – it's highlighted gaps in education globally from access to inclusions to the digital divide- we need to look beyond the horizon and be ready to deal with the unexpected Education is the ultimate driving force for social progress – despite of all: education never stops . communication collaboration and action must move forward- we are all connected – and it is time to pool our efforts together- people and collectively our society need wisdom from educators such as I hope you are---different innovative approaches can come together and Generate more intellectual exchanges, inspire more collaborations and deliver a deeper impact - this view can energise more educators policy makers, social entrepreneurs and prompt stakeholders- to push for progress in our society to tackle existing issues and challenges and to prove that positivity and humanity are crucial for building a better place for everyone and I also hope there will be useful takeaways from this summit that can be turned into meaningful actions

I have great expectations from todays discussion- I wish you all an enjoyable time
====================
videos at https://www.youtube.com/channel/UCHo4NsawH5bqPGE3exCmxHw
Posted by chris macrae at 11:14 AM No comments:

i had booked a coffee with muhammad yunus somewhere in soho

just as we were finishing he said: what can you tell me  about gordon brown

i said he's scottish; unlucky because he served blair loyally but now he's got his chance to lead subprime will drown him - why do you ask?

yunus brought out his cheeky grin- can you find me a taxi ?, i need to get to number 10

Posted by chris macrae at 4:53 AM No comments: